Prescott Valley Police spokesman Jerry Ferguson spoke at a PVEB Lion’s meeting and advised citizens to be vigilant against fraud.

“It’s a critical issue that affects us. Prescott Valley is not eliminated from it,” explained PVPD spokesman Jerry Ferguson. Each year, around 470 fraud cases come through the police department.

Some fraud victims experience a financial loss because of scammers and the PVPD receives calls every day from citizens who may either be a victim of fraud or they report an attempted scam via telephone. 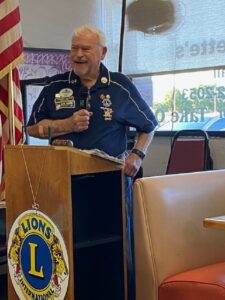 Ferguson said that if you think you’re answering a sales call, find out who the caller is and why they are calling. If you believe you are going to receive something for free or that you’ve won something, it’s a scam.

“Don’t confirm any account information. The scammer wants you to volunteer personal information,” he said.

Sometimes scammers will call and ask if you can hear them. If you say “yes,” the criminal can take your voice recording and use it as though you agreed to a purchase or other transaction.

“Some scammers have sophisticated equipment that can show telephone numbers that may seem familiar to you; sometimes you’ll answer your phone and think you are talking to a police officer. The criminals are creative,” Ferguson said.

He said it’s impossible to state every single kind of fraud because criminals are always coming up with new ways to extract information and money out of the public.

Ferguson explained that if the scammer is asking for money or any kind of personal information such as banking or credit cards – or even asking for a gift card, then it’s not right.

Also, if the caller begins to threaten you because you didn’t pay for something, there’s a warrant out for you or there’s an issue with your Social Security, that too is a sham.

The elderly population are more at risk for fraud because some folks aren’t familiar with technology. Seniors make good targets because of retirement funds, savings or other resources that are attractive to criminals.

Another type of scam involves local tragedies that play upon the public’s emotions. Recently, a Cottonwood police commander lost his life during a DUI incident and citizens received scam calls requesting funds towards the family and funeral expenses.

Bogus emails in your mailbox should be deleted as well, Ferguson said.

Always check the details of who is sending the email if you’re in doubt. Check to see who sent the email before you open it. Otherwise, delete all suspicious emails and don’t open them.

“Most scammers are overseas or out of the country such as Russia or Asia. That’s why it’s so difficult to track these scams,” Ferguson said. Because of international nature of these scams, it’s important to report them to the Federal Trade Commission. Visit FTC.gov/complaint or call 1-877-382-4357.