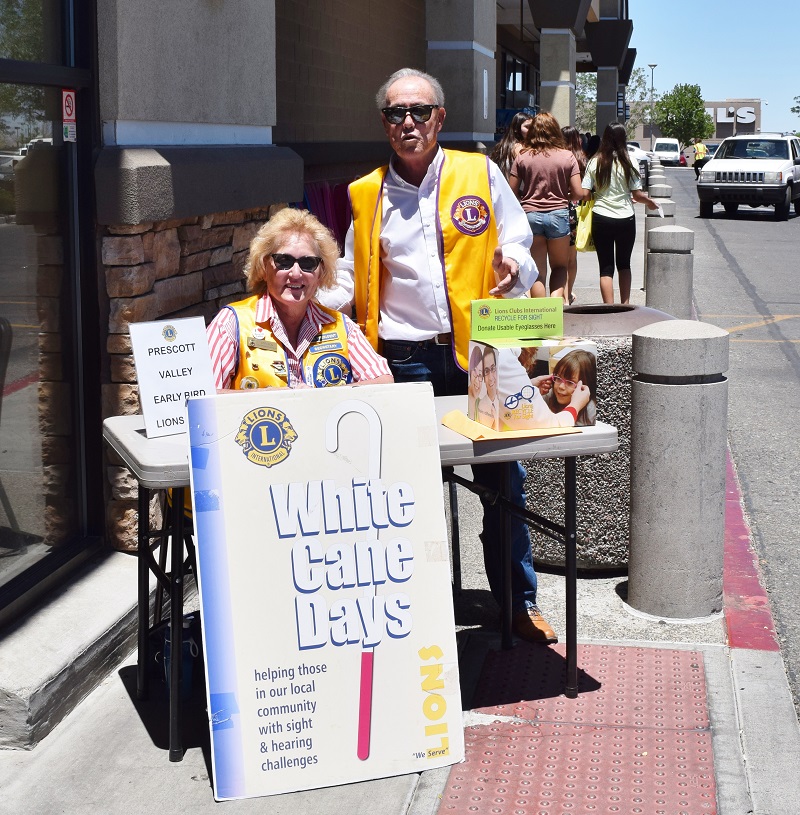 The following short history of the white cane was written by Philip Strong. Phil was an advocate at the ACB office for pedestrian safety.

The white cane is not just a tool that can be used to achieve independence; it is also a symbol of the blind citizens in our society. To honor the many achievements of blind and visually impaired Americans and to recognize the white cane’s significance in advancing independence, we observe October 15th of each year as “White Cane Safety Day.” Today, the white cane works both as tool for the blind as well as a symbol, but this has not always been the case.

Throughout history, the cane, staff, and stick have existed as traveling aids for the blind and visually impaired. Dating back to biblical times, records show that a shepherd’s staff was used as a tool for solitary travel. The blind used such tools to alert them to obstacles in their path. For centuries, the “cane” was used merely as a tool for travel and it was not until the twentieth century that the cane, as we know it today, was promoted for use by the blind as a symbol to alert others to the fact that an individual was blind.

This new role for the white cane had its origins in the decades between the two World Wars, beginning in Europe and then spreading to North America. James Biggs of Bristol claimed to have invented the white cane in 1921. After an accident claimed his sight, the artist had to readjust to his environment. Feeling threatened by increased motor vehicle traffic around his home, Biggs decided to paint his walking stick white to make himself more visible to motorists. It was not until ten years later that the white cane established its presence in society. In February, 1931, Guilly d’Herbemont launched a scheme for a national white stick movement for blind people in France. The campaign was reported in British newspapers leading to a similar scheme being sponsored by rotary clubs throughout the United Kingdom. In May 1931, the BBC suggested in its radio broadcasts that blind individuals might be provided with a white stick, which would become universally recognized as a symbol indicating that somebody was blind or visually impaired.

In North America, the introduction of the white cane has been attributed to the Lion’s Clubs International. In 1930, a Lion’s Club member watched as a blind man attempted to make his way across a busy street using a black cane. With the realization that the black cane was barely visible to motorists, the Lion’s Blub decided to paint the cane white to increase its visibility to oncoming motorists. In 1931, the Lion’s Club International began a national program promoting the use of white canes for persons who are blind. Throughout the 1920s and 1930s, blind persons had walked with their canes held diagonally in a fixed position, and the role for the white cane took on a symbolic role as an identifier.

When the blind veterans of World War II returned to America, the form and the use of the white cane was further altered to help return veterans to participatory lifestyles at home. Doctor Richard Hoover developed the “long cane” or “Hoover” method of cane travel. These white canes are designed to be used as mobility devices and returned the cane to its original role as a tool for mobility but maintained the symbolic role as an identifier of blind independence. During this period, the white cane began to make its way into government policy as a symbol for the blind.

The first special White Cane Ordinance was passed in December 1930 in Peoria, Illinois. It granted blind pedestrians protections and the right-of-way while carrying a white cane. In 1935, Michigan began promoting the white cane as a visible symbol for the blind. On February 25, 1936, an ordinance was passed by the City of Detroit recognizing the white cane. To promote the new ordinance, a demonstration was held at City Hall where the blind and visually impaired people were presented with white canes. The following year, Donald Schuur wrote the provision of a bill and had it proposed in the Michigan State Legislature. The proposal gave the carrier of the White Cane protection while traveling on the streets of Michigan. Governor Frank Murphy signed the bill into law in March, 1937.

The Presidential proclamation emphasized the significance of the use of the white cane as both a tool and as a visible symbol. In the first White Cane Proclamation, President Johnson commended blind people for the growing spirit of independence and the increased determination to be self-reliant and dignified. He said in part: “A white cane in our society has become one of the symbols of a blind person’s ability to come and go on his own. Its use has promoted courtesy and opportunity for mobility of the blind on our streets and highways.”

During most years since 1964, the President has proclaimed October 15th as White Cane Safety Day. On October 15, 2000, President Bill Clinton again reminded us of the history of the white cane as a tool, and its purpose as a symbol of blindness: “With proper training, people using the white cane can enjoy greater mobility and safety by determining the location of curbs, steps, uneven pavement, and other physical obstacles in their path. The white cane has given them the freedom to travel independently to their schools and workplaces and to participate more fully in the life of their communities. It reminds us that the only barriers against people with disabilities are discriminatory attitudes and practices that our society has too often placed in their way. As we observe White Cane Safety Day,  let us recall the history of the white cane, its emergence as a tool and a symbol through history; a staff of independence. Let us also recall the events that have permitted us to celebrate October 15th as White Cane Safety Day.”